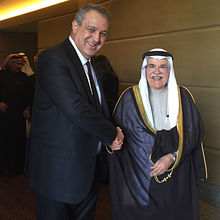 Venezuela and Saudi oil ministers met over the weekend.

The comments come on the heels of chatter Thursday from the United Arab Emirates that a production cut could be imminent. Another piece of the equation: Russia and the U.S. said late Thursday that a temporary Syria ceasefire and humanitarian aid agreement was reached in Geneva. Turkey had warned that hundreds of thousands of refugees could still flee Syria, but both Turkey and Saudi Arabia have been reluctant to combat the Islamic State with troops on the ground.

The United States Oil Fund  (USO) moved into positive territory by the end of the day though oil prices dropped to a 12-year low. Emerging market energy stocks didn’t fare well. Argentina producerYPF (YPF)  fell 2.5%, Brazil’s Petroleo Brasileiroor Petrobras (PBR) fell more than 5.5%, though it was up in after-hours trading. PetroChina(PTR) fell 0.6%. The iShares MSCI Turkey ETF (TUR) was up in after-hours trading,

SGH, a consultant to asset managers and policy makers on the global economy, with anexpertise in Saudi Arabia and Iran, notes that while Russia announced the king’s visit, the Saudis have not confirmed it. Still, CEO Sassan Ghahramani wrote late Thursday:

“We take the news of a possible visit in March to Moscow by Saudi Arabia’s King Salman bin Abdul Aziz Al Saud very seriously, as potentially marking the culmination of an extended, high-stakes diplomatic maneuvering between the Kingdom and Russia to reach terms on both an OPEC, non-OPEC oil output cut as well as the resumption of the Syria peace negotiations in Geneva. … On the oil front, there is still nothing more than a basic framework to an agreement for now, and the negotiating process is fraught with potential setbacks, for instance when it comes to the actual terms of market share, quotas, or production standstill agreements and the like; but we do believe as we first reported in January, there has been steady, even substantial movement towards an eventual agreement between the OPEC and non-OPEC oil-producing countries for a coordinated cut in crude oil output, probably sometime in March …

An essential prerequisite to the Saudi visit to Moscow and for an oil deal is whether there is progress towards a cease-fire is agreed to in Munich. We believe it is likely, within days at most if not hours, and the March 1 start date to the cease-fire initially proposed by the Russians will be brought forward, albeit with likely concessions by the Saudis and the Americans on the terms to a resumption of the Syria peace negotiations in Geneva …”