If the number is lower than expected, global markets won’t be happy and  the iShares MSCI Emerging Markets exchange-traded fund (EEM) could come under pressure. But SGH Macro Advisors CEO Sassan Ghahramani and Kevin Muehring, senior managing director,  note that the Chinese government has broadcast a narrow outcome, based on government GDP estimates cobbled together from nine departments. GDP is expected to be between 6.7-6.8%, and should remain around 6.7% in the fourth quarter, “with a slight lean to 6.8%,” note the folks at SGH, a consultant to asset managers and policy makers on the global economy.

“China releases third-quarter gross domestic product data (Tuesday night in the U.S.) that is expected to show the economy grew by at least 6.7%, on pace with the first and second quarters. After a wobbly start to the year, China’s economy has stabilized thanks to easy-money policies and a wave of infrastructure projects. This puts China on track to meet its 2016 growth target of 6.5% to 7%, although economists say Beijing’s decision to prop up growth is likely to fuel debt and overcapacity and delay much-needed reforms. Alongside the GDP release come figures on industrial production, fixed asset investment and retail sales for September. China also is expected to release its September lending data sometime this week.” 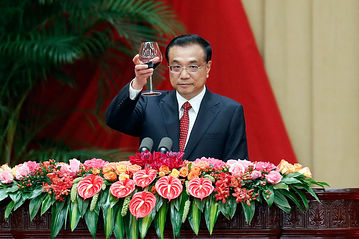 “The People’s Bank of China will continue to manage the RMB to balance between the USD and a basket of currencies, meaning under current conditions the RMB will depreciate against a stronger dollar, while appreciating against the basket, and vice versa if the dollar trend shifts. Officials do not expect the RMB to break 6.7500 this month.

…  Premier Li Keqiang will chair a meeting to analyze the numbers. All nine departments expect Q3 GDP to come in at least at 6.7% and for CPI to recover from 1.3% in August to about 1.8% in September. More than half – five of the nine departments – expect GDP to come in at 6.8%, including the PBOC and powerful NDRC. Four others, including the Ministry of Finance, expect 6.7%.

The economy, however, clearly still faces considerable downward pressures, including overcapacity, debt risk, and a housing glut in third and fourth tier cities. And when it comes to housing, while most Western economists have focused on the upside bubble risk in the first tier cities, Beijing, perhaps tellingly, still appears to be more focused on stabilizing the glut in the lower tier markets, and Chinese officials are concerned that measures taken to date have proven ineffective. For example, even though two-thirds of the provinces have been providing subsidies for home buyers in these lower tier markets, these have proven to be no more than a drop in the bucket compared to the cost of housing, and inventories in these markets remain high, even as prices remain low. Officials expect these subsidies to be increased.”

” … in September. China’s exports and imports disappointed strongly, with exports plunging by 10.0% YoY and imports by 1.9%. The weakness in exports was broad-based among export destinations. Excluding the Chinese numbers, trade looks better, but the average annual growth rate of other early-reporting countries (Brazil, Chile, South Korea, Taiwan and India) still slipped back to become negative in September. …Related to the trade cycle is a possible onset of inflationary pressure in Asia. Chinese producer price inflation turned positive in September for the first time in almost five years. We do not think though that inflationary pressures are building in China or elsewhere in Asia. The higher producer price inflation in China is strongly correlated with higher commodity prices and the weakness in the trade-weighted renminbi, both of which are effects that should soon fade. Moreover, the price gains in September were concentrated in some heavy industry sectors and do not look sustainable. With house-building set to slow, investment still quite weak and the overall economy on a slowing trajectory, we expect Chinese producer prices to return to mild deflation …”

As we noted in the post China Investments: On Cusp Of ‘Paradigm Shift’?, some Chinese internet plays have been investor favorites this year: Netease (NTES) is up 47% this year, Tencent Holdings (TCEHY) is up 39% and Alibaba Group Holding (BABA) is up 28%. Those returns are much better than the performance of the iShares China Large-Cap ETF (FXI), up 7%, and the Deutsche x-trackers Harvest CSI 300 China ETF (ASHR), down 11%.