Greeks were in the streets Monday and Tuesday showing support for staying in the European Union. But plenty of them were pulling their money out of banks, and related stocks are crumbling today. 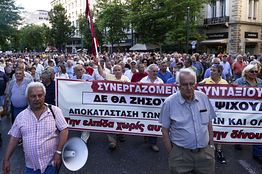 Pensioners take to the streets in Athens June 23.

Sassan Ghahramani, CEO of SGH Macro Advisors, a policy research company based in New York, writes that withdrawals have reached a record of 1.4 billion per day in recent days. He is hopeful that Greece can secure an extension on its bailout. But he writes of the basically frozen nature of the Greek banking system already. He writes:

Greece needs to “get access to the EUR10.9 billion ($12.2 billion) returned in February by the HFSF (Hellenic Financial Stability Fund) to the EFSF (European Financial Stability Fund), and the SMP (Securities Market Programme) profits that will surge in July to a total of EUR 3.1 billion ($3.47 billion), and possibly an increase of the T-bills ceiling, which is also much needed for the banking system.
The latter has lately come under enormous pressure, as some Greek officials point out that capital flight from Greek banks is not going to stop even in the event of a positive outcome of the extension’s negotiations, and therefore believe capital controls could still be put in place further down the road. But at least for now, and given a deal may be signed this week, the risk will be diminished. That being said, in practice, some unofficial controls are already in place, as Greek banks refuse to execute big money orders on the spot.
On top of that, other weaknesses have been identified in the banking system: a shortage of T-bills to use as collateral for to obtain the ELA (between 7 and 15 billion left), and a dangerous depletion of deposits to a scary level – the number floated is currently 120 billion Euros, and if they go under 100 billion the banks might just as well shut down. There is also – down the road – a problem with NPLs [non-performing loans], now judged to be unofficially close to EUR 90 billion.
For this reason, the Greeks have been quietly pressing – in the context of the extension – on the European Central Bank to consider an increase in T-bill issuance, or a reinstatement of the exemption that would allow Greek banks to get cash directly from Frankfurt.”