The CEO of SGH Macro Advisors discusses the efforts of central banks to renormalize after the financial crisis. 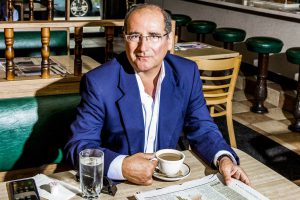 “The central banks will shock everybody and manage a normalization cycle without crashing the markets and the economy.“ —Sassan Ghahramani

Can central banks safely withdraw the emergency, ultra-accommodative policy introduced after the 2008 financial crisis without causing the economy and markets to collapse? That question bedevils investors today and was an apt one for Sassan “Sass” Ghahramani, founder and CEO of SGH Macro Advisors. Ghahramani, 54, has a long history of researching markets and policy for investors and policy makers. Born in Iran to a diplomatic family, he became a foreign-exchange trader and went on to run Medley Global Advisors, with a specialty in the Group of Seven nations, emerging markets, and energy. After organizing the sale of Medley Global to private-equity firms, Ghahramani founded SGH in 2009. He says the probability is “about 70%” that the central banks can engineer a smooth landing. Nevertheless, he points out several other risks in the markets, including the reversal of the carry trade in the euro. For more, keep reading.

Barron’s: You recently said the Federal Reserve’s policy normalization would be put to the test in the second half. Please expand.

Ghahramani: This is a very important and interesting turning point. The next two years will be key. I call it the great global repricing. People could make—and lose—a lot of money depending on how they trade this. The Fed is at the forefront of policy normalization. It began the process last year but was derailed by the United Kingdom’s vote to exit the European Union. Normalization has become a global phenomenon. Now, the European Central Bank is starting to normalize, the Bank of Canada had its first interest-rate hike in seven years, and the Bank of England is likely to hike this year. Major global banks are fortunate in that inflation has been so contained, and they can manage normalization on an extended time frame. The BOE is the only one where inflation is above their target. The recent drop in inflation and lack of pass-through is one reason we don’t expect the Fed to hike in September. They’d like continued progress on the job front and for that to feed through to inflation, so they can hike in December.

What happens with the central banks’ balance-sheet reduction?

It’s a priority for both the Fed and the ECB. To the ECB’s pleasant surprise, negative rates didn’t cause consumers to hoard cash, and they were modest enough so banks didn’t pass them on to consumers. In Europe, they want to start with the balance sheet. Quantitative easing is not considered that unconventional anymore, although it was controversial when the Fed expanded from buying Treasuries to mortgage-backed securities. Janet Yellen, from a political as well as economic perspective, would like to leave the Fed with an effective neutral rate and gotten normalization going before turnover at the Fed chair level and various governor levels in the first six months of next year. She doesn’t want the balance sheet to become a political football under a hostile Congress with a new Fed.

What are the risks?

Many think that the central banks will kill the multiyear rally—that if you remove the underpinnings too quickly when valuations are high, it could hurt markets. Recently, Yellen said it seemed that valuations were kind of high. The fear is not panning out so far. Equity and risk assets can continue to do well.

The central banks will shock everybody and manage a normalization cycle without crashing the markets and the economy. They need to be sure they’re ahead of the markets in telegraphing when they’re going to hike. The Bank of England, for example, is notoriously volatile in its communications.

Monetary conditions have been very accommodative globally. The central banks are withdrawing liquidity very carefully and cautiously. They haven’t made an error. There’s an interesting structural component to the markets: Volatility is so low that investor expectation of returns is very modest. In the old days, a traditional macro fund would have returns in the teens, but would need to sit through a reasonable amount of volatility to get it. Nowadays, you can get good single-digit returns. In fact, one of the worst trades for macro funds has been their constant attempt to short equity markets.

Finally, you have to look at the fundamentals. The U.S. economy and the euro-zone economy are not so bad right now. We have moved from a 3%-to-4% gross-domestic-product growth world to a 2% world. So you reprice assets and multiples on 2% growth and 1%-to-1.5% inflation. The big positive surprise has been Europe. It has finally stabilized the inflation rate, and lo and behold, the euro zone is growing 2%. Those are great numbers for output potential. China hasn’t collapsed. The U.S. is stuck at 2%, as well. It is good enough.

The story for the rest of this year is European rates. The core European rates have been extreme havens. Look at Germany—growth has been great, and the 10-year is basically yielding from 0.5% to 0.6%, compared with the U.S. 10-year, which is at 2.4%. This is why there could be risks on the way up and there’s so much sensitivity every time [ECB President Mario] Draghi opens his mouth. Bond market experts get it. But global investors, retail investors, should be watching this whole normalization process. The euro has become a carry-trade currency. Just to give you an anecdote, you have seen outflows in some emerging market funds because of the ECB and their euro-denominated clients. There is a whole universe of other trades that get hurt by an overly rapid rise in rates. Argentina, which has a history of defaults and creditor disputes, just issued a 100-year bond that was 3.5 times oversubscribed by investors hungry for yield. Corporate bond markets have issued tons of paper at incredibly compressed yields and spreads, and for long durations. Other trades include high-yield bonds, rate-sensitive mortgage and housing bonds, and so-called risk-parity funds that buy both bonds and stocks on the assumption rates won’t go up dramatically.

What causes the next stock market correction?

The bond market. There will be a time when, if you get a little bit of inflation back, it will cause the classic reallocation between stocks and bonds and question the valuations on stocks. Some geopolitical events are obvious. North Korea is a major issue. The Trump administration is more hawkish and less predictable, but even its tweets about North Korea are very cautious.

What about oil’s volatility?

Structurally, oil is in a bear market. The Saudis and Russians worked very hard to put together an OPEC/non-OPEC deal to curtail production, and they’ve actually had pretty good discipline. What happened is U.S. production went up more than expected. In addition, Libya and Nigeria, two nonsignatory countries, had blow-the-ceiling-off production. So OPEC is leaning on Libya and Nigeria for the next agreement. If they can bring them in at the numbers they’re already producing, there will be marginal discipline. If, at the same time, the global economy continues its modest growth trajectory, and OPEC is lucky, oil prices can go to the mid-$50s. The other related geopolitical story is that the new Saudi crown prince, Mohammad bin Salman, is very aggressive and unpredictable. The State Department told him to cool it on picking fights with Qatar. The Saudis are coming to a moment of reckoning with managing oil prices and OPEC cohesion and struggling with Iran. Iran and Saudi Arabia hate each other but have been playing nice when it comes to oil policy. So the concern is this unravels the accord.

A year after Brexit, what is your prognosis for the euro?

For the European Union as a political institution and for the cohesion of the euro and the euro zone, the worst is over. The EU and the euro were both set up by the ruling class and the politicians without broad political support, and the question you hear a lot is the legitimacy of Brussels over the rest of Europe. In 2013, 2014, we almost had the breakup with Greece and the north/south divide economically. There is a structural flaw: You have one central bank but no finance minister for Europe, so there’s no governing body to maintain discipline. Also, a lot of the political strain in the EU has been over intra-EU migration, which helped add to the pressures that led to the Brexit vote. But look at what happened in the Netherlands, where the nationalist Geert Wilders came in much worse than expected, and in France, where Marine Le Pen did not do as well as expected and the establishment guy Emmanuel Macron is running it. Italy hasn’t had an election yet, but the populist Five Star movement has been struggling. My point is that the worst of the fundamental pressures tearing at the EU are behind us. Economic data have improved. Unemployment is down. Growth across northern and southern Europe is either stable or strong. We are and have been bullish on Europe, the EU, and the euro.

For the second half, you have also forecast the possibility of a legislative train wreck in the U.S.

There is a high probability of a communications train wreck on the debt ceiling and the budget. Cohesion is tough within the GOP. One of the more positive things they’ve done is remove Trump a little from the discussions, which gives the administration plausible deniability to look the other way, and Republicans the political freedom to increase spending. The surprise would be if the GOP gets its act together and gets even the most modest and minor tax cut done this year, from 33% to 28% or 25%, or whatever. People keep talking about the Trump reflation trade. Yes, stocks are up, but if you actually talk to investors, they don’t expect anything from Washington, D.C., at this point. One of the proposals put out is the treatment of pass-through corporations [that pass through to owners a proportional share of income and losses]. Right now, they are taxed at the owner’s rate; it would tax them at the corporate level. This is a huge deal economically that would light a torch under the economy.

What about Japan, which is nowhere near normalizing?

As the world settles into a 2% economy, Japan is basically a half-a-percent economy because of the demographics and aging population. That reinforces a very low-inflation, low-wage-growth structure. This is an economy with a high standard of living, solid corporate sector and business profits, and a 2.8% unemployment rate.

Between them, Bank of Japan Governor Haruhiko Kuroda and Prime Minister Shinzo Abe managed to get Japan out of deflation. The problem is that Kuroda set a 2% inflation target that is just too high. They would need to create such a distorted stimulative monetary policy to get there. They’re starting to get some pressure already from the bond markets and banks and private-sector economists, which have been in a world where the yield curve is locked between negative 0.1% and zero on the 10-year. There is zero trading. There is no market, no actual activity except government issues and the BOJ’s massive bond-purchase program. People are saying forget the 2%, just let this thing normalize structurally; perhaps it’s not appropriate for Japan. Also, Governor Kuroda’s term comes to an end next April. But that is a story for next year.