Skip to main content
SGH Insight
Bottom Line: Right now, there is nothing in the data that is stopping policy speculation from moving in a hawkish direction. Moreover, Fed speakers aren’t getting in the way of market participants moving in that direction. That does leave us a little nervous about some kind of pushback from Fed officials, but we see additional hawkish surprises as still more likely in that the Fed will add a fourth rate hike to the March SEP and the risks are rising that the Fed will need to come out of the gate with a 50bp hike.
Market Validation
Bloomberg 1/18/22

Money markets are reflecting increased speculation that the Federal Reserve might opt for its first supersized boost to borrowing costs in more than two decades.
While a quarter-point increase is still the most likely scenario, swap markets are now pricing in more than 25 basis points of tightening by the end of March. With no move anticipated at this month’s meeting, this suggests traders are at least contemplating the possibility of a 50-basis-point move in March. The Fed hasn’t tightened that much in one shot since May 2000, although back then the central bank’s tightening cycle was already well underway.

CPI came in hot with core inflation up 0.6% compared to expectations of 0.5%. Annualized, core inflation was 6.8% in December and 5.5% over the year:

It is interesting that the Fed treats these inflation rates with considerably less urgency than the small 25bp downside miss prior to the pandemic, but this is perhaps a topic for a later time. Will inflation moderate over the course of the year as expected? If we look at the even more restricted measure excluding shelter and used vehicles, inflation is still elevated: 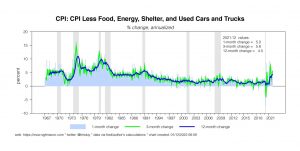 We receive many questions about the balance sheet, specifically regarding an abrupt end to asset purchases at the January meeting. The primary argument in favor of such a move is that continued asset purchases are nonsensical given the policy focus is now on quantitative tightening. That’s true, and it creates the risk that the Fed ends asset purchases in January. The mood going into the meeting might turn suddenly given that it would be a cleaner narrative than continuing asset purchases while discussing aggressive quantitative tightening. Still, balance that against four reasons the Fed is likely to stick with the current plan. First, the Fed discussed QT at the December FOMC meeting, so it has already been engaged in this topic while still purchasing assets. Two, the reason the Fed accelerated tapering in December was to open the space for a March rate hike. Further tapering, however, doesn’t buy the Fed anything else unless it wants to hike in January, or intra-meeting, both of which aren’t likely. Three, the Fed wants policy rates to be the primary signal of the policy stance. Ending asset purchases now absent a rate hike in January would confuse that message. While ending asset purchases in January might reaffirm a March rate hike, the expectations of a March hike are already very high. And fourth, Federal Reserve Chair Jerome Powell had ample opportunity to signal a January end to asset purchases in his confirmation hearing but instead stuck to the March timeline:

“Sure, so I think to your point, you know, we’re at a place where unemployment is now very low, historically low and inflation is well above target and the economy no longer needs these — this very highly accommodative stance of policy. And I would expect that this year, 2022, will be a year in which we take steps toward normalization.

That will involve raising the federal funds rate, that will involve ending asset purchases in March and perhaps later this year depending on the run of things. We would also see ourselves beginning to allow the balance sheet to shrink. So that’s, that’s where I think that’s, that’s the broad picture of what, what I see happening.”

We have to achieve price stability, and I believe we will, and I’m confident we will. And again, it’s not — it’s not just a question of restraining demand. All — that will be — right now, we’re stimulating demand with very highly accommodative policy. As we move through this year, we will, in all likelihood — we don’t know the future.

But if things develop as expected, we’ll be normalizing policy, meaning we’re going to end our asset purchases in March, meaning we’ll be raising rates over the course of the year. At some point perhaps later this year, we will start to allow the balance sheet to run off, and that’s just the road to normalizing policy.”

I don’t like ignoring Powell’s direct policy guidance. That said, Governor Lael Brainard will have an opportunity to put a January end to asset purchases on the table in her confirmation hearing tomorrow. Also watch for New York Fed President John Williams on Friday as another possible signal. This Fed likes to move methodically, so if during the blackout period the Fed coalesces around a January end to asset purchases, we should look for some signal in the press alluding to that outcome.

St. Louis Federal Reserve President James Bullard turned more hawkish and now expects four rate hikes in 2022. As I have said, the data is driving us in this direction. Moreover, it is unlikely the data drives us in a different direction before the second half of the year. We expect the Fed will need to add a fourth rate hike into the March SEP. Bullard’s logic in today’s Wall Street Journal interview confirms our expectation that the near term path of policy is pretty much set:

“If we get a couple of rate-hike moves under our belt during the first part of this year then we’ll be in better shape” for monetary policy over the longer run, and it might allow the Fed to not raise rates as much over time as would be the case if rate rises are delayed, Mr. Bullard said.

I will go one step further here and add that if the consensus drifts in this direction of trying to get ahead of the curve again, the risk is that by March the Fed needs to hike rates 50bp.

Bullard says he expects inflation pressures to ease over the course of the year to bring inflation back down toward 3% (still elevated relative to target!). Note, however, his aggressive unemployment rate forecast:

“These are some of the tightest labor markets that you’ll ever see in the United States,” Mr. Bullard said. “I think that process is going to continue all the way through 2022, and I’m now expecting the unemployment rate in 2022 to breach the 3% threshold,” he said.

I don’t think a sub-3% unemployment rate will be consistent with declining inflationary pressures. That tells me the Fed won’t be backing off in the second half of the year.

“If I had my druthers, we would have ended the purchases sooner than we’re ending up doing,” Mr. Bullard said, adding “we should, in tandem with the rate hikes I’m recommending, also allow passive runoff of the balance sheet, beginning in the spring.” Passive run off means allowing securities to mature and not be replaced.

I would interpret that as meaning Bullard lost the battle for an earlier end to asset purchases and is resigned to March. If it didn’t happen long ago, there isn’t much point to ending suddenly now. Note that he says QT should begin in the spring. That suggests he is pushing for hikes in March and June and QT in May. As we said, somewhere around the middle of the year the Fed will start reducing the balance sheet.

Bottom Line: Right now, there is nothing in the data that is stopping policy speculation from moving in a hawkish direction. Moreover, Fed speakers aren’t getting in the way of market participants moving in that direction. That does leave us a little nervous about some kind of pushback from Fed officials, but we see additional hawkish surprises as still more likely in that the Fed will add a fourth rate hike to the March SEP and the risks are rising that the Fed will need to come out of the gate with a 50bp hike.