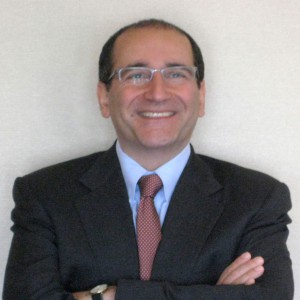 Prior to forming SGH, Ghahramani was President and CEO of Medley Global Advisors, a policy research firm now owned by the Financial Times. As CEO of Medley he managed the transition and sale of the firm to a private equity partnership in 2005, as well as the subsequent sale of a minority stake in 2007 to Goldman Sachs.

Before Medley, Ghahramani was a senior foreign exchange trader at AIG Trading, Lehman Brothers, Chemical Bank (now part of JP Morgan), and UBS in New York, where he was the head of spot foreign exchange trading. He also formed and ran Tribeca Securities, a commodity, futures and equity broker-dealer.

Ghahramani was born in Tehran, Iran into a diplomatic family and spent his childhood in Canada, Russia, Iran, and Spain, where he attended the Anglo-American School of Moscow, Tehran International School, and American School of Madrid. He moved to the United States to attend Brown University, where he obtained a BA in International Relations, and continued his studies at New York University, where he obtained an MBA in Finance.

Ghahramani is fluent in Spanish and Farsi, and is a member of the Board of Directors of the Iranian-American Political Action Committee based in Washington DC.